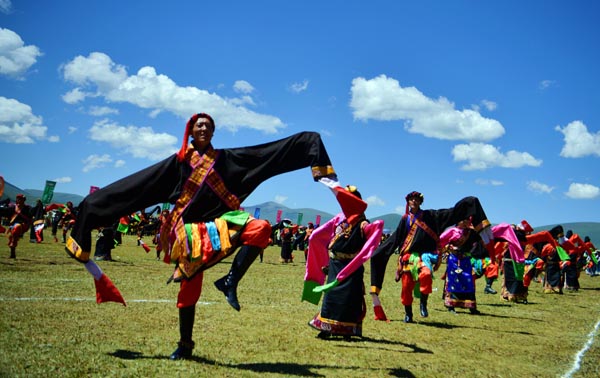 Taking place across the ethnic Tibetan regions of China, traditional Guozhuang battles feature hundreds of colorfully dressed performers singing in complex group styles in a contest that can last for hours, if not days, Fang Aiqing reports.

Don't forget your parents, nor your brothers and sisters."

At the age of 46, Bukreng still chokes up when she recalls the song that accompanied her wedding 23 years ago.

Born in 1944, veteran performer Xu Guilian sang the lyrics to the tune of a traditional Tibetan Guozhuang dance in front of the bride's home in Benzilan town, Dechen Tibet autonomous prefecture, in Southwest China's Yunnan province to an audience of around 100.

The song made such an impression on Bukreng that she still sheds a tear whenever she hears the tune today.

A listed national intangible cultural heritage, traditional Guozhuang dance is a type of group dance and singing without musical accompaniment that is popular with the ethnic Tibetan people of Yunnan, Qinghai, Sichuan, Gansu provinces and the Tibet autonomous region.

Benzilan, renowned for its Guozhuang dance tradition, sits along the Jinsha River, an upstream tributary of the Yangtze River described as the "golden sand river" due to its sandy waters. The town is located on the route from northwest Yunnan to Tibet. 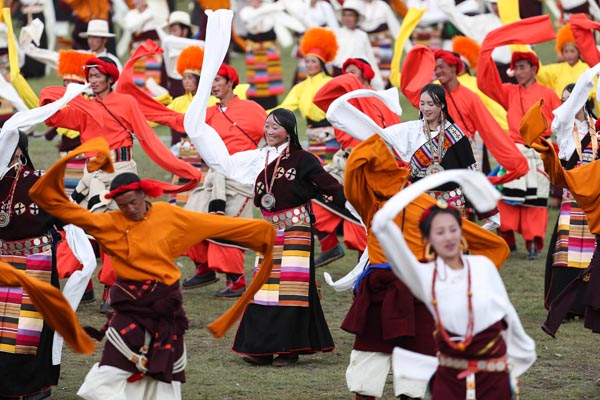 Locals stage a Guozhuang dance performance at the opening ceremony of a horse-racing festival in Litang county, Sichuan, on July 30. [PHOTO/XINHUA]

Whenever there was a wedding planned, usually in winter, Xu would be invited to sing and dance. Very few performers were skilled enough to sing traditional wedding tunes.

Other than the fixed dance steps that most people can learn, Guozhuang dance is a difficult art form to master because of the complexity of the singing, especially its tunes and lyrics.

The longest tune, for example, consists of three pieces, each requiring the performer to sing out just three words over the course of five minutes.

Xu teaches her dozens of students the most difficult part first, since many can't master it and therefore are not able to perform the whole piece.

However, nobody performed Guozhuang dance at her own wedding in the 1960s. It was a time when most of the townsfolk were living in poverty, and Guozhuang dance was regarded as an aristocratic privilege.

Xu began dancing Guozhuang around the age of 25, and it was not until she was almost 40 that she could afford a simple outfit for her performances.

Bukreng, interpreting for Xu, who speaks the Tibetan language, says a simple outfit suitable for Guozhuang dance performances costs more than 3,000 yuan ($427.8), while a more luxurious costume could easily be three times that amount, even before the accessories－which are often made of gold, silver, coral or turquoise－are taken into account. 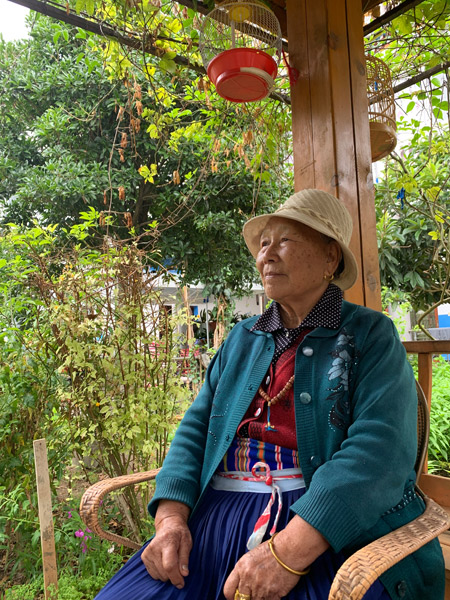 Xu frequently lingered at weddings and other festival ceremonies with Guozhuang dance troupes in her youth, and learned the traditions from older generation of folk performers.

She was a gifted and fast learner. By the age of 40, she was able to master all the key skills and tunes, as well as the ancient Tibetan language that formed the lyrics.

One exciting facet of Guozhuang dance is the song "battles" that are held at local festivals like the Lasi, where villagers worship their mountain gods a few days after Spring Festival.

During the festival, local people gather together to compete in groups. A dance party like this can last for several days.

For competitors, the key is to react quickly－to give out a thread, or respond to what the others have thrown out. It's a test of wisdom, proficiency and life experience, Bukreng says.

When one group says they are leaving, the others would respond in song to persuade them to stay. When one group asks for help taking care of their family and friends, another would respond by agreeing and describing how well they intend to treat their loved ones.

Lively tunes keep people's spirits up late into the night. When a man asks for an introduction to a pretty young woman, others will set barriers in reply.

It can also be a time for personal expression. For example, when a singer's former lover is in the crowd, the performer may reveal their heartbreak, yearning or lingering affection through song.

But what happens when a team loses?

"They should be ashamed to hold their heads up," both Xu and Bukreng joke. 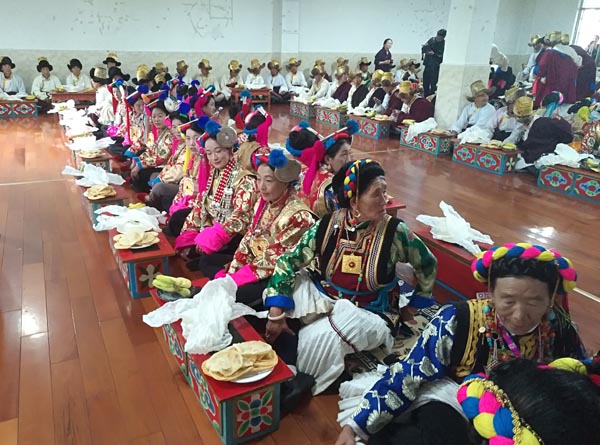 In a neck-and-neck situation, an audience member will offer hada－white silk scarves that represent goodwill and purity in ethnic Tibetan areas－to the older performers at dawn and ask them to end the battle.

The longest battle that Xu has taken part in lasted for a day and two nights.

Unlike many other forms of intangible cultural heritage in China, Guozhuang dance is not a traditional ritual that's separated from daily life. Local people perform Guozhuang in squares to keep fit.

As part of a local government initiative, more than 300 Guozhuang songs have been recorded, with scores of them being saved for posterity to better preserve their legacy and help with future learning.

"As a form of cultural heritage, Guozhuang dance should be kept as original as possible. But innovative elements, such as adding accompaniment or creating new dance movements, are also needed for it to develop," says Li Zhinong, a professor at Yunnan University who co-wrote a book on Benzilan Guozhuang dance tradition a decade ago.

One of Xu's granddaughters has been taking lessons from her since last year. However, having spent years living in cities, her 31-year-old granddaughter often slips into pop tunes as she practices.

She might need another 10 years if she wants to become an authentic Guozhuang performer, Xu says.