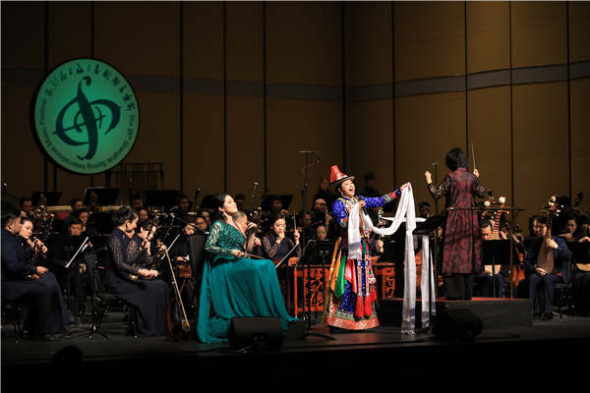 A huqin player and a vocalist perform together with the Shanghai Chinese Orchestra at the Shanghai Grand Theatre on May 5 to celebrate a new performance season. (Photo provided to China Daily)

The Shanghai Chinese Orchestra kicks off its new performance season with a showcase of traditional musical works from Northwest China.

The Shanghai Chinese Orchestra celebrated the opening of its new performance season with a concert of music from Northwest China at the Shanghai Grand Theatre on May 5.

A series of new compositions premiered at the concert, which showcased local and traditional musical elements from Qinghai, Gansu, Shaanxi provinces, Ningxia Hui autonomous region and Xinjiang Uygur autonomous region. Vocalists and instrumentalists from these northwestern provinces and regions took the lead alongside musicians from the SHCO.

The concert gave a glimpse of the mission and style of the SHCO, said Luo Xiaoci, director of the company. The SHCO was founded in 1952, and was the first large-scale modern orchestra to feature Chinese instruments in the country. Luo summarized the company's mission as "presenting Chinese music with an international vision and a contemporary style". 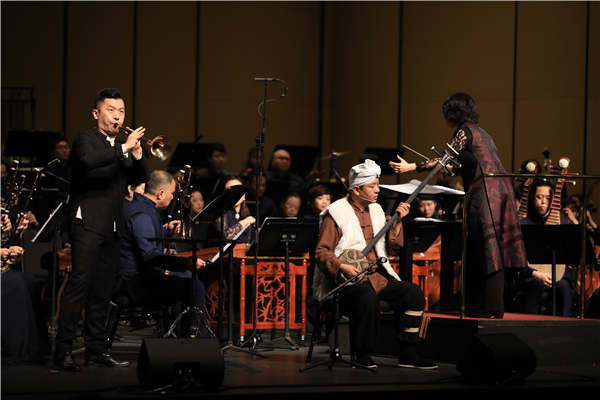 A suona artist and a ballad singer perform with the same orchestra. (Photo provided to China Daily)

"In the past few years we have presented heavyweight productions that reflect the main theme of our times, as well as lighthearted chamber concerts that are popular with young audiences," Luo says.

Among the highlights for the 2018-19 season will be a concert production commissioned from Shanghai-based composer Huang Lei.

Under the title, The Common Home, Huang will bring together signature music styles and instruments from around the globe to create a concert about "the destiny of all humanity".

"Social development has caused serious environmental issues, and this is a problem we all face," Huang says. "We are all in it together, and I want to address the topic by combining traditional Chinese instruments with folk music from all over the world."

Together with musicians from the SHCO, Huang is making extensive studies of folk music from around the world in an attempt to find musical elements that would suit being performed on Chinese instruments, while looking for foreign instruments that would fit well with a Chinese orchestra, Huang tells China Daily.

For example, the traditional Chinese stringed instrument guzheng shares a similar quality of sound with the sitar, an instrument used widely in traditional Indian and Middle Eastern music.

"A conversation can be achieved between these instruments and the music styles," he says. "I am working closely with musicians at the SHCO to explore all kinds of possibilities."

The new production is scheduled to premiere on Nov 3, du 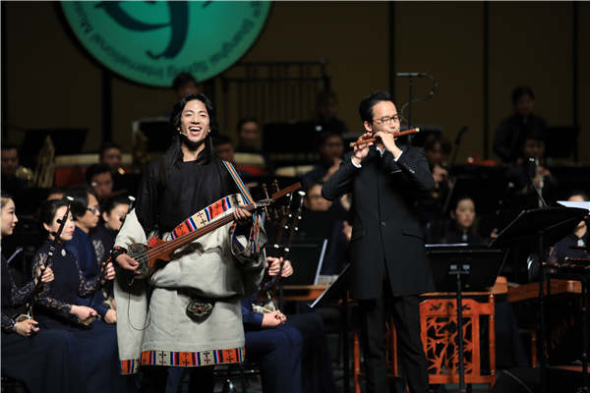 A suona artist and a ballad singer perform with the same orchestra.(Photo provided to China Daily)

Also due to premiere in the new season is a concert about Chinese mythology named Hero, by composer Li Bochan. "I will create a symphonic epic, with each chapter named after an ancient Chinese hero," he says. "I will work hard to present the depth and dignity, as well as the exquisite and gentle side of Chinese national music, and will find an exclusive sound or expression for each hero," he said.

Hero will be performed on Dec 15, under the baton of Tang Muhai, chief guest conductor and honorary artistic director of the SHCO.

"Musicians at the SCHO view their instruments as if they are priceless antiques from the Palace Museum," Tang says in a video clip celebrating the SHCO's new season. "Each sound we make speaks of the beauty of Chinese culture - just like our language. It's time for the world to know about China's culture, and China's music."

Earlier this year, the SHCO made a successful European tour, New Oriental, which featured the sound of an ancient flute made from a bone that dates back 8,000 years, as well as compositions by contemporary Chinese artists such as Zhao Jiping and Tan Dun.

Since then Shanghai Odyssey has toured extensively, performing in Beijing and Guangzhou.

"It was a great way to introduce Shanghai to other parts of China," Luo says.